Like all good New Zealand stories, this one starts with an All Blacks win against the Australians.

A 41 points to 13 drubbing in this case at Eden Park, Auckland, in the second of the annual Bledisloe Cup clashes between the two nations on a clear cool night in August, 2015.

New Zealand rugby fans left happy that night, but some left happier than others, because they did not have to walk miles to their cars as they had been among the first users of a new parking app which gave them access to parking spaces on people’s driveways right around the ground.

To be fair, not many did. On the launch day of Parkable there were only a few ‘hosts’ signed up so there were precious few bays to reserve, but those that were available went quicker than an All Black winger through a Wallaby line. 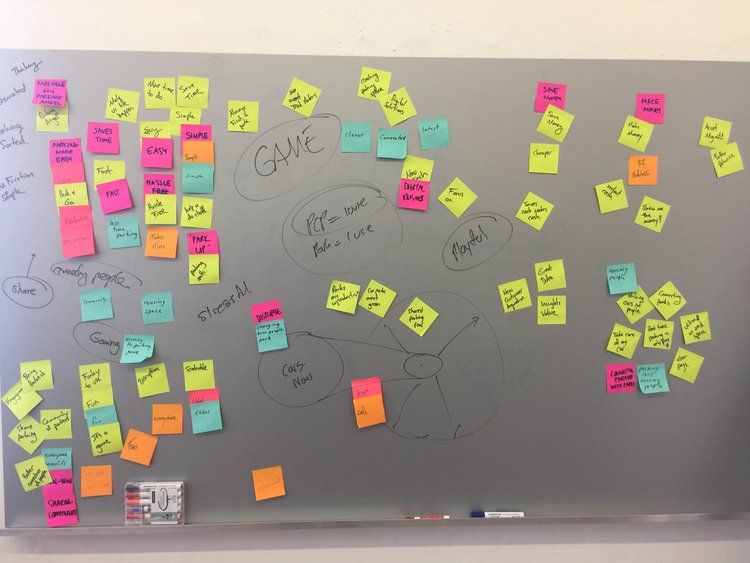 And for the three founders of Parkable, this was proof that their months of work, worry and sacrifice, might actually have been worth it. Those few rugby fans had proven that Parkable could make money for hosts from their under-utilized property (in this case their driveways) and that people wishing to park would use an app to book them.

“It was a bloody relief to be honest”; says Toby Littin. “Needless to say, we had a big night after this; we appeared to have a shared economy business on our hands and we beat the Ozzies at rugby. Not bad really. The next morning was a bit dusty”.

The original idea for a shared economy parking business had been a brainwave of Warwick Beauchamp five years earlier in 2010. 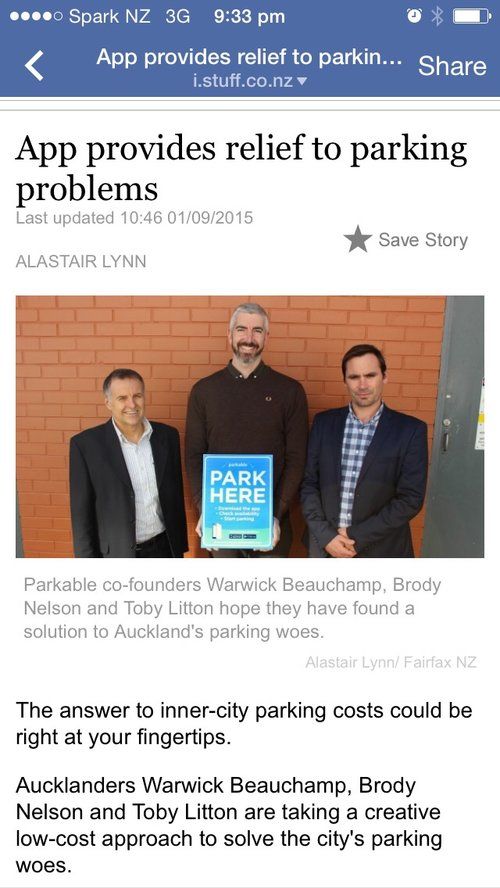 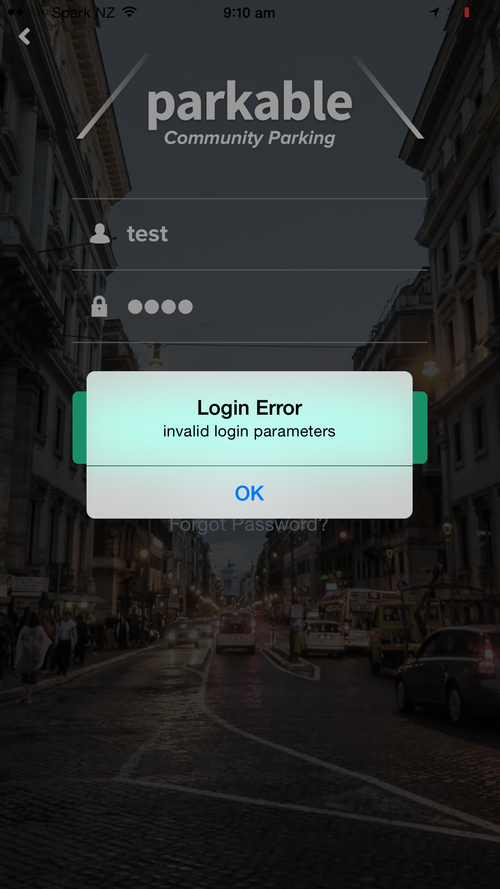 “I was talking to a mate and we were complaining about traffic and congestion and how hard it was to get a park in the city and yet nearly every house had an empty drive-way and wasn’t that a potential solution for the driver and a potential revenue source for the home-owner,” says Warwick.

“I couldn’t shake the idea and so I thought I would have a go at making a business out of it. I set up U-Park pretty soon after and had a web site built in India. And surprise, surprise the business did not work. In fact it barely started. The technology was awful and it was web based not app based and you had to pay through PayPal and people weren’t really ready for it and so I gave up in about 2012.”

U-Park lay dormant as the world got used to app based services like Uber and AirBnB and at the same time, Toby Littin got bored at his government job. 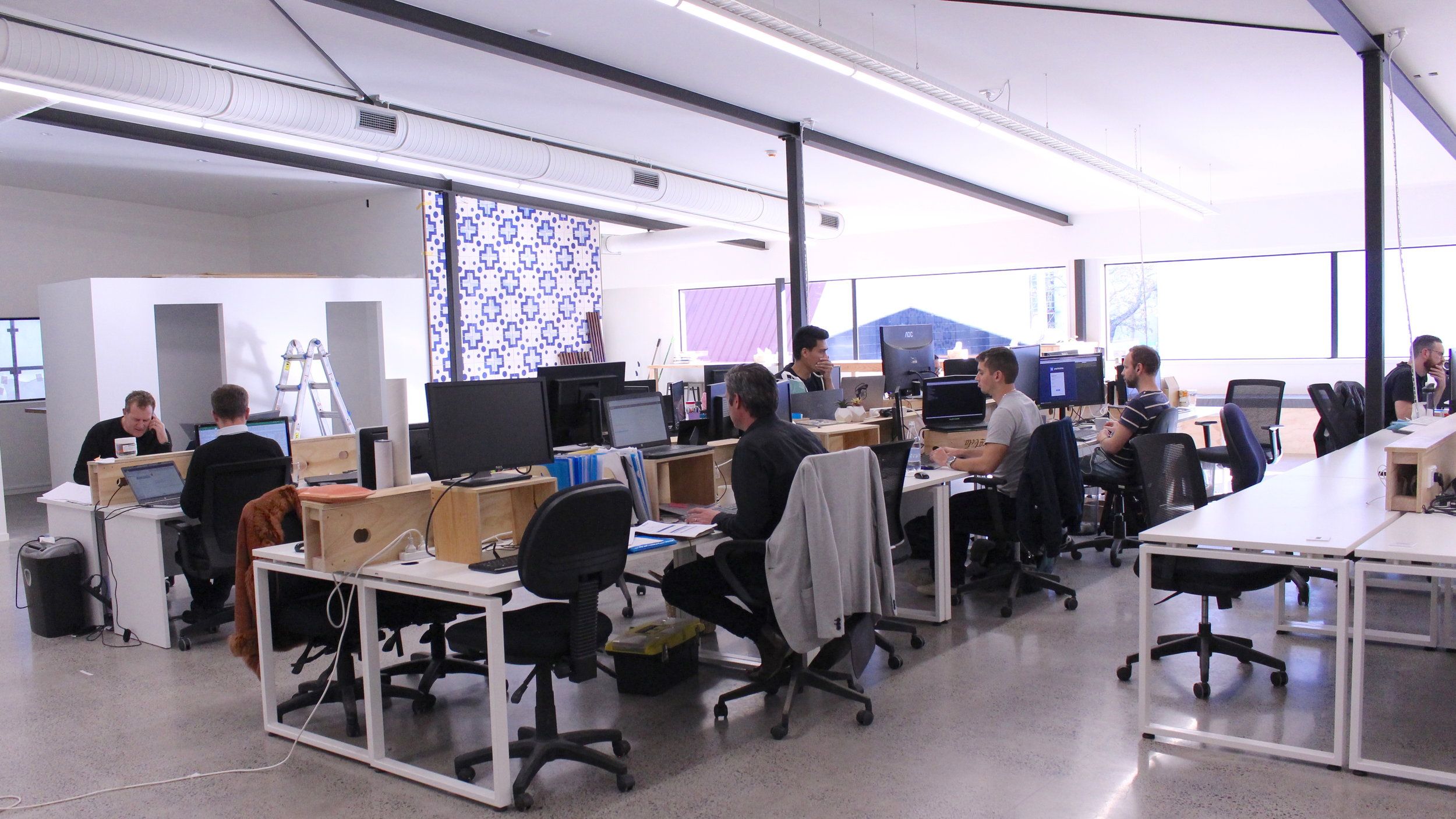 “It was early 2014 and I was looking for a business idea I could run myself rather than just advise other people. I wanted to be a doer not a consultant I guess, and knew Warwick from our property development past and called him up and said as much and he told me about this parking idea over coffee.

“I loved it. Parking sucks. Parking was obviously broken and if we could connect vehicles to empty real estate we might have a solution. That seemed huge.”

“I knew we needed someone to help with the technology and I had met Brody at a wedding and he ran a digital and development agency. Perhaps he would have some ideas? We all jumped on a call and got more and more excited by the potential of it and I guess, in the course of that, of doing something entrepreneurial together.

“There were more calls, and more coffee and a few beers”, said Toby.

Brody had recently returned from the UK and was busy establishing a digital agency. That meant he had premises and staff, which made him doubly useful to a start-up with nothing other than a bad brand name and a dodgy technology stack. 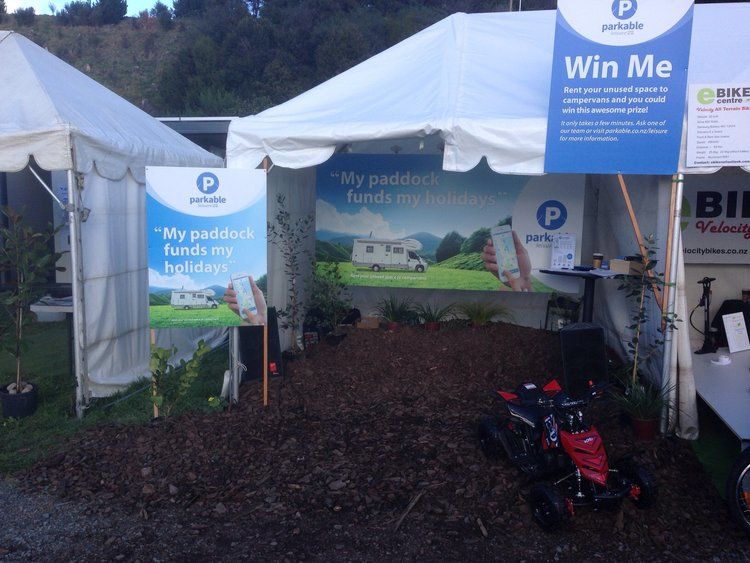 “Almost my first words to Warwick, who bear in mind, I had only just met, were that his technology was terrible and we would have to bin the lot and write-off all his investment and start again. He just laughed and agreed, which I took as good sign,” said Brody.

“Those early days were really hard work as we all had other jobs, so much of the early coding was done at home at my kitchen table as we tried to stand up a working IOS and Android app with a payment system built in. There’s a heck of lot to that. Happily my memories of those days are a little blurred now,” said Brody. 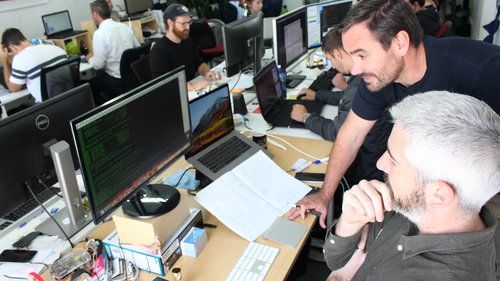 “We have come such a long way”, says Warwick. We launched on the back of a Rugby game and after that a Neil Diamond concert of all things, because we thought our market was going to be based around events. That might have proved the system worked, but it also proved that events and baby boomers are NOT our market. At the Neil Diamond concert we were hosting parking bays, I had an older women begging me to take $50 cash for the space rather than download my app and book it on that for $10.”

“Our dynamic market is younger and it is commuters and regular users”, says Warwick.

“We moved into shared offices in the eaves of an old building in Britomart where we boil in the summer and freeze in the winter and share one toilet between us, but as every day gives us more bays, more downloads and more parkers using the service and as word spreads it really feels we are becoming established”, says Toby. 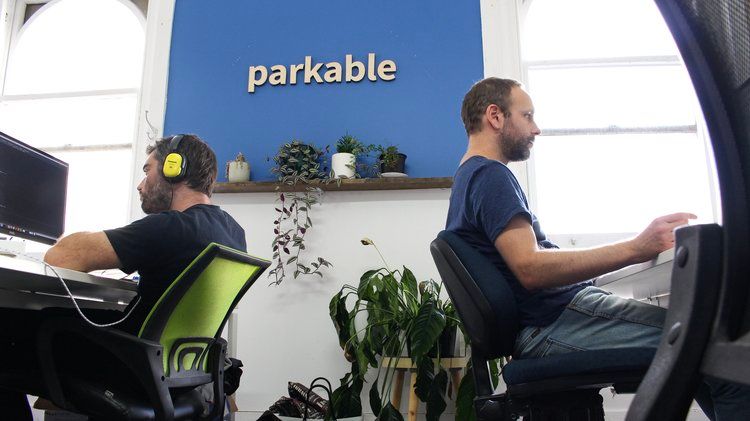 Two and a half years after that rugby match, Parkable has a subscription business and Software-as-a Service offer for big businesses wanted to manage and optimise their parking bays for employees and guests. It employs 15 people, is profitable and can now offer parking solutions in Christchurch and Wellington.

And all three founders remain in the business full time. 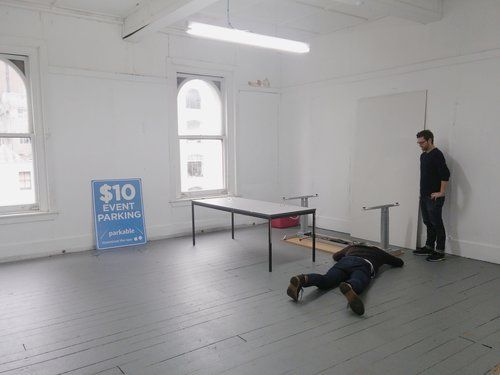 Brody assembling his stand up desk at Parkable HQ. Kyle watching on. - Oct 2015 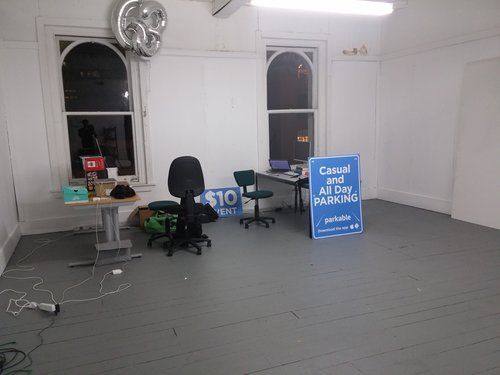